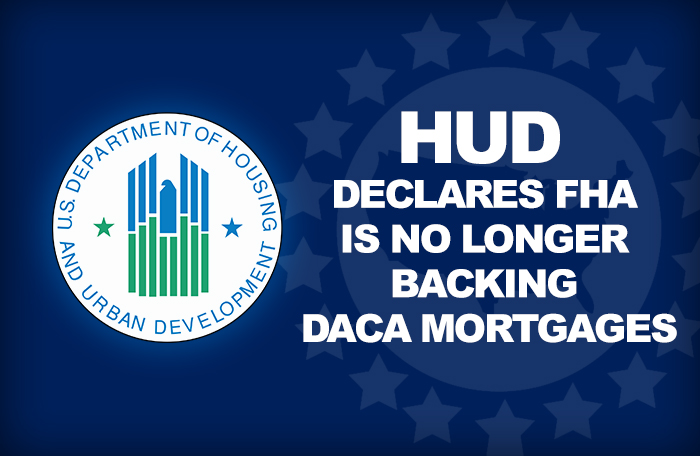 After months and months of uncertainty about whether the Federal Housing Administration is backing mortgages for Deferred Action for Childhood Arrivals recipients or not, the Department of Housing and Urban Development has finally given an official answer. And that answer is no.

In a letter sent this week to Rep. Pete Aguilar, D-CA, HUD Assistant Secretary for Congressional and Intergovernmental Relations Len Wolfson stated definitively that Dreamers are not eligible for FHA mortgages.

“Determination of citizenship and immigration status is not the responsibility of HUD and the Department relies on other government agencies for this information,” Wolfson said in the letter to Aguilar (which was reported first by Buzzfeed).

That declaration is a reversal from HUD’s previous answers to questions about whether FHA is backing mortgages for Dreamers.

HUD told HousingWire earlier this year that its policies surrounding DACA borrowers had not changed, despite ongoing confusion in the mortgage industry.

As Dani Hernandez previously detailed for HousingWire, DACA recipients were eligible for FHA backing under certain circumstances, but that was under a different administration that had different interpretations of the policies in question.

Additionally, numerous lenders told HousingWire that they’ve also been told directly by a HUD representative that DACA recipients are not eligible.

HousingWire subsequently investigated and found a dozen different lender bulletins and guidelines that each stated that Dreamers are ineligible for FHA financing.

And earlier this year, in response to a question from Aguilar during a Congressional hearing, HUD Secretary Ben Carson said that HUD’s policies on FHA loans for Dreamers have not changed.

But now, Wolfson has stated conclusively that DACA borrowers cannot get an FHA loan.

“HUD has been very clear that it has not implemented any policy changes during the current Administration, either formal or informal, with respect to FHA eligibility requirements for DACA recipients,” Wolfson said in the new letter to Aguilar.

“Since at least October 2003, FHA has maintained published policy that non-U.S. citizens without lawful residency ‘are not eligible for FHA-insured loans,’” Wolfson wrote. “This same policy was incorporated in the Single-Family Housing Handbook in September 2015—under the previous Administration—and clearly states that ‘[n]on-U.S. citizens without lawful residency in the U.S. are not eligible for FHA-insured mortgages.’”

But, as Hernandez previously discussed, under the Obama administration, HUD was backing DACA borrowers under certain circumstances.

But the Trump administration clearly has a different view on the matter.

Wolfson cites a statement from Janet Napolitano, the Secretary of Homeland Security when DACA was established in 2012, who said that DACA is an exercise of “prosecutorial discretion” and “confers no substantive right, immigration status, or pathway to citizenship.”

Therefore, HUD is now stating that Dreamers are ineligible for FHA mortgages, and apparently have been for some time.

The letter was sent mere days before the House Financial Services Committee passed legislation that would require HUD to support DACA borrowers.

On Wednesday, the House Financial Services Committee approved the “Homeownership for DREAMers Act,” which would clarify that Deferred Action for DACA recipients cannot be denied mortgages backed by FHA, Fannie Mae, Freddie Mac, or the Department of Agriculture based solely on the basis of their DACA status.

The bill was introduced by Rep. Juan Vargas, D-CA, and passed out of committee by a vote of 33 to 25. That bill will now move to the House floor. If passed, that would undo the now-standing FHA policy, but passage in the Senate and approval from the White House would likely be a long shot.