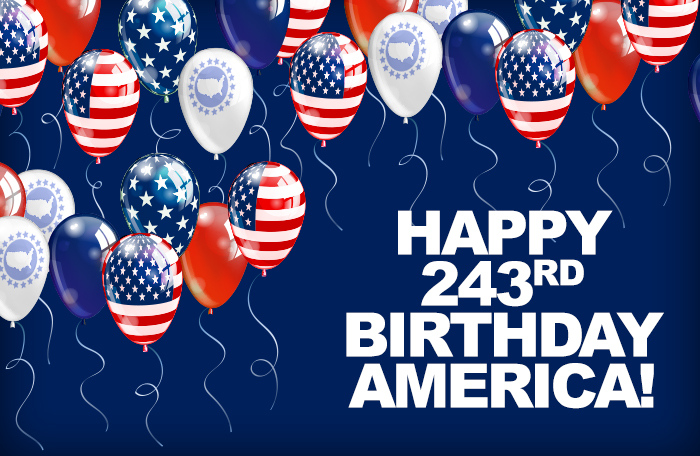 The 4th of July, otherwise known as Independence Day, arrives tomorrow. But why does the US celebrate the holiday? Here are the facts about what Independence Day is and the history behind this iconic day.

Tomorrow – Thursday, July 4 – U.S. financial markets will be closed and we will see Americans celebrate Independence Day, otherwise known as the 4th of July. The day commemorates the signing of the Declaration of Independence in 1776. This document declared that the 13 American colonies were no longer under British rule and were free, independent states.

Way back in the 18th century the United States was not considered the United States. In fact, what we now call states were actually called colonies. The United States was actually an extension of England. People traveled from England aboard ships to settle in America, but eventually differences in life, thought, and interests began to develop which caused a rift between Britain and America.

When the colonies were first settled they were allowed to pretty much develop freely without any interference from Britain, but things abruptly changed in 1763. Britain suddenly decided that they needed to take more control over the colonies. Britain decided that the colonies needed to return revenue to the mother country and they needed to pay for the colonies defense, which was being provided by Britain. But the colonies did not agree with these new rules at all. They felt that since they were not represented in Parliament that they shouldn’t have to pay any kind of tax to the mother country, hence the saying “no taxation without representation”?. When Britain continued to tax, the colonies formed the First Continental Congress to persuade the British government to recognize their rights. When this didn’t work a war was declared, which is known as the American Revolution.

After the First Continental Congress failed to persuade Britain to recognize the colonies’ rights, and war was declared, things began to heat up. Many people who were both considered moderates and radicals had decided that enough was enough and that any kind of taxation without representation was considered tyranny. People such as John Adams, Samuel Adams, and Ben Franklin, as well as a group called the Sons of Liberty decided that it was time to unite all of the colonies and to stand together against Britain.

The 4th of July

Some Fun Facts about the 4th of July

1. The state of Massachusetts was the first to recognize the Fourth of July as a holiday, with Massachusetts legislature called for an official state celebration in 1781.

2. July 4 celebrations did not become a federal holiday until 1870 when Congress voted to make it so, and It wasn’t until 1941 that the holiday became a paid one for federal employees.

3. In total three US presidents have died on July 4, and two were founding fathers. Both Thomas Jefferson and his fellow Declaration writer John Adams died on the very same day: July 4, 1826 – incredibly the 50th anniversary of the adoption of the Declaration. Then five years later in 1831, James Munroe became the third president to die on the holiday, with the New York Evening Post writing at the time: “Three of the four presidents who have left the scene of their usefulness and glory expired on the anniversary of the national birthday, a day which of all others, had it been permitted them to choose [they] would probably had selected for the termination of their careers.

Wishing everyone a Happy and Safe 4th of July.