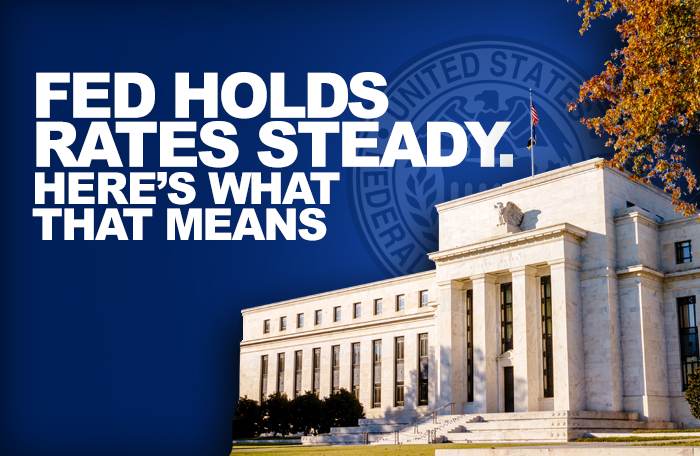 The FED Makes A Steady Decision

For consumers, the so-called Powell Pivot may mean a reprieve in escalating borrowing costs. At the same time, stashing cash in a savings account is reaping a better return than it has in years.

The Federal Reserve’s decision Wednesday to keep interest rates steady came as a relief to many. And rightfully so.

After raising the federal funds rate nine times in three years, with the last move coming in December as financial markets were melting down, concerns about a slowing economy and a looming U.S.-China trade war has caused the central bank to reverse course.

A divided Fed held the line on interest rates at its meeting this week and indicated there are still no cuts coming in 2019.

The current target range for the fed funds overnight lending rate is 2.25% to 2.5%

For consumers, the so-called Powell Pivot may mean a reprieve in escalating borrowing costs, which can impact your mortgage, home equity loan, credit card, student loan tab and car payment. At the same time, stashing cash in a savings account is reaping a better return than it has in years.

Here’s a breakdown of how it works:

As a result of the increase in interest rates, savings rates — the annual percentage yield banks pay consumers on their money — are now as high as 2.5%, up from 0.1%, on average, before the Federal Reserve started increasing its benchmark rate in 2015.

“Savers are in a position now where they can earn more on their savings than the rate of inflation,” said Greg McBride, chief financial analyst at Bankrate.com.

With an end to interest rate hikes for now, savers won’t continue to see the same upward momentum, but they can still reap the benefits of those significantly higher savings rates by switching to an online bank. (Online banks are able to offer higher-yielding accounts because they come with fewer overhead expenses than traditional bank accounts.)

Most credit cards have a variable rate, which means there’s also a direct connection to the Fed’s benchmark rate.

On the heels of the previous rate hikes, credit card rates now stand at a record high of 17.85%, on average, according to Bankrate.

If the Fed moves to cut short-term rates down the road, the prime rate lowers too, and credit card rates will follow suit. For cardholders, that means they could see that reduction in their APR within a billing cycle or two.

However, “that’s of little benefit when we are talking about record highs,” McBride said. “If you are paying 18% now, and then 17%, that’s still an extremely high cost of borrowing.” (At any time, cardholders to can also reach out to their issuer directly to request a break on interest rates.)

The economy, the Fed and inflation all have some influence over long-term fixed mortgage rates, which generally are pegged to yields on U.S. Treasury notes.

As a result, mortgage rates are already substantially lower since the end of last year.

The Fed’s decision to leave rates unchanged means many homeowners with adjustable-rate mortgages or home equity lines of credit, which are pegged to the prime rate, will see their interest rate and monthly payments remain the same for the time being.

However, when the federal funds rate lowers, consumers with HELOCs will also benefit from smaller monthly payments within a billing cycle or two, according to Holden Lewis, NerdWallet’s home expert.

While some ARMs reset annually, a HELOC could adjust within 60 days.

For those planning on purchasing a new car, any Fed decision likely will not have any big material effect on what you pay. For example, a quarter-point difference on a $25,000 loan is $3 a month, according to Bankrate.

“That’s not going to translate into any notable difference for would-be car buyers,” McBride said.

While most student borrowers rely on federal student loans, which are fixed, more than 1.4 million students a year use private student loans to bridge the gap between the cost of college and their financial aid and savings.

Private loans may be fixed or may have a variable rate tied to the Libor, prime or T-bill rates, which means that if the Fed cuts rates, borrowers will likely pay less in interest, although how much more will vary by the benchmark.

(A college education is now the second-largest expense an individual is likely to incur in a lifetime — right after purchasing a home. The average graduate leaves school $30,000 in the red, up from $10,000 in the early 1990s.)